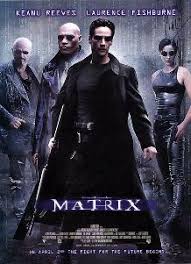 After learning a little bit of American history yesterday, today we’re gonna talk about yet another Sci Fi movie that forever changed the way movies are made: The Matrix! Free your mind.

This movie came out in 1999, when we were all a little worried about Y2K… remember that? The fear that all computers would crap out on us at the turn of the century? Silly times… But anyway, this movie was unlike anything we’d ever seen on screen. Not only was the story revolutionary, but the methods used for filming it were replicated in pretty much every action film that followed. To this day, that bullet dodging sequence, and that 360 spin around a character are used in everything from action films, to comedies… We all know what it is, and it’s become an overused and predictable device to depict a suspenseful moment. Back in 1999 though, it had never-ever been done, and it left us all open-mouthed and drooling at the theater.

The story is complicated but eerily plausible. We follow Neo, a reclusive computer hacker as he comes to realize that the world as he knows it — is an illusion, and robots have taken over the planet and now use humans as their fuel… Whaaat?! Kinda hits home, doesn’t it… ‘cuz aren’t we all just a little worried about robots acquiring consciousness and taking over the world? It’s as ubiquitous as the fear of a zombie apocalypse, but we can talk about that another day.

So anyway, the robots have created this imaginary world, known as The Matrix, and have connected all the human brains to it, kind of like a neverending dream. As the humans dream, they are comatose in individual vessels of pink goo, where they are fed intravenously through tubes connected to their body. Creepy as hell. 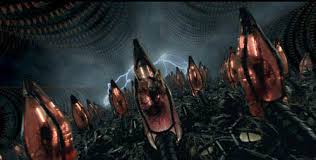 The movie moves well, it keeps you engaged and wowing away for its duration. And even 14 years later, the special effects stand up to any movie made today. It’s truly a masterpiece, and if you haven’t seen it yet: first of all, What the hell is wrong with you? and second of all… go NOW.

Also, the sequels kinda aren’t as good as the first… but I would advise to watch them anyway. Follow it through to the end, my friend… even if it has one of the most frustrating, hair-pulling endings of any franchise in history, you should still see it… or maybe not… I don’t know, you choose. I can’t tell you what to do.

The weapons used in this movie are EPIC. From all the kung fu awesomeness, to the crazy guns I can’t describe ‘cuz I know nothing about assault weapons. However, Heavenly Swords can help you out with various blades I think would’ve fit right in with rest in this film. Especially in the second one, there’s some pretty badass katanas going on… so I’ve picked out some weapons I think Neo and Trinity would’ve loved. They would definitely come in handy when fighting Agent Smith. This majestic sword is 31” overall, with a 440 stainless steel blade measuring 20”. Thick and substantial, it makes a daring display, and Neo would love it! Measuring 19″ overall, this sword has a stainless steel, double-edged blade with a silver finish. Impressive and beautiful! It comes with a sheath. Oh my! Any warrior carrying these weapons on his back will look amazing. These twin blades come super sharp, and the nylon sheath helps you carry them on your back, for a unique and effective way to carry your weapons. This guy is handmade and amazing. It comes with a super sharp 1045 high carbon steel blade. It has a dramatic curve, and is completely functional and battle ready.

Sometimes we don’t want to wait until a birthday or holiday to show our appreciation of the people we love. I always considered the random thoughtful gift to be way more meaningful than the hastily bought, obligated gifts of say, Valentine’s Day. A box of chocolates? Wow. How original. Am I right?

So let’s start a gift revolution. Let’s give presents to the people we love just because we want to. Just write something like, “Happy Thursday” on the card. I promise you, the gift-getter will be so happy at the surprise, they won’t even care it’s not a special day. Any day can be special, if you share it with someone you love.

And what’s more, let’s step away from traditional gifts. I swear, if I get one more scented candle, I’m going to throw it across the room. I don’t care who gave it to me. So what can you get someone that is original, unexpected, and unbelievably cool? Heavenly Swords has got your back on that one. Here you can find amazingly clever gifts for anyone who’s ever seen a movie, or played a video game. Pretty much anyone who’s ever been a kid would love this stuff… and correct me if I’m wrong, but didn’t we all start out that way?

These are just a few suggestions. We’re adding new products every day, so make sure you browse it up! This guy is pretty and menacing at the same time. Not to mention he’d look awesome on a bookshelf. Any guy or girl who’s into cool looking weapons would love this.

Do you love zombie movies? Are you certain it’s only a matter of time before the shizz goes down? Then be ready to kill some undead with this affordable, yet fully functional razor sharp sword. The heavy duty nylon sheath with shoulder strap is included. Does someone in your life use a cane? Get them this kickass piece of equipment, so they can strut their way down the sidewalk. The dagger style blade is made of stainless steel and doesn’t come sharp, but this cane is still one bad mamma-jamma. The movie was really good. The sword is really pretty! Any girl who’s a fan of Kristen Stewart will want to own the sword that helped her destroy the evil witch (brilliantly played by Charlize Theron), and win her kingdom back. Who says girls don’t like weapons? How cute is this miniature! It’s the perfect item to personalize your loved one’s desk at work. The Samurai sword is a letter opener and it’s not sharp, so it’s safe to keep at work. The Japanese armor is a beautifully detailed replica of the kind of armor a Samurai warrior would wear on his way to battle.

We have so many great products, I can’t even wrap my head around listing them all. We have armor, ninja gear, pirate stuff, survival stuff, movie replicas, anime replicas, a crazy selection of katanas and other japanese awesomeness, and we’re adding more stuff every day! 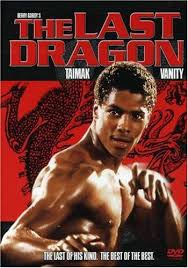 A martial arts fantasy musical… what?! Yes. It’s been done, and it is glorious. If you’re standing there perplexed, smooth out that frown, ‘cuz today we’re talking about The Last Dragon. Sho’nuff!

The Last Dragon is a freakin’ masterpiece. It has everything, a noble hero, a beautiful songstress in distress, a crazy hilarious villain, piranhas, big ‘80s hair, and an awesome musical number at the end where everyone is dressed in white tuxedos. You can’t make this stuff up.

This film was released in 1985, and hasn’t left my consciousness from the moment I saw it. It follows Leroy, a devoted martial artist, who worships Bruce Lee (who doesn’t?) and dreams of one day achieving the ultimate mastery of martial arts, otherwise known as “The Glow”. 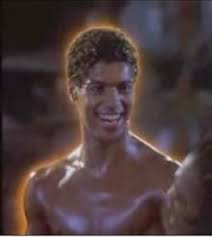 He must defeat the Shogun of Harlem, a hilariously memorable character called Sho’nuff.

There’s all kinds of weirdness in this movie, but my favorite part is when he finally catches a bullet with his teeth in the climactic scene. You must watch this movie. NOW. Your life will never be the same.

After you watch it, and your hope for mankind is likely restored, you’ll probably want to train just like Leroy. In case Sho’nuff should show up at your local movie theater. Here’s some pretty amazing gear from Heavenly Swords to quench your thirst for ninja mastery. Leroy would be so proud: These are made of steel with factory sharp edges. They come in a nylon pouch so you can be ready whenever an opponent should challenge you. This 39” swords is made of 440 stainless steel and comes with a pitch black blade, so you can go undetected in the night. The square guard can be removed and used as two throwing stars. This four pointed black throwing star is the perfect pocket weapon. It is made of 440 stainless steel and comes with a nylon pouch. Careful, it’s sharp! These swords are not only beautifully unique, but they will cut through almost anything. They come super sharp, and look great prominently displayed anywhere. Let Sho’nuff know who’s the true Master with these swords! Talk about “the glow”. These swords bring ninja weapons to a whole new level. They are functional showpieces that come fully sharpened, so you can leave your friends speechless when you demonstrate their power. Use responsibly, of course. This claw has Sho’nuff written all over it. I imagine he would’ve loved showing up somewhere wearing it, and scaring the bejeesus out of anyone who got in his way. “Who’s the prettiest? Sho’nuff!”

Sidenote: There’s been a lot of talk on the interwebs about doing a remake of this film. Why?! Please, do not remake this movie. You can’t recreate the magical camp that is this classic. It is a journey to a mystical world… it’s ridiculous, and silly, and just plain perfect. You wouldn’t repaint a Van Gogh, would you?

Sign up to receive the latest breaking news, as well as all of your other favorite headlines!

Check Out Our Recent Posts FREE Shipping for items over $200!